I just wanted to make coffee for angry people… but the moon had other plans.

Malaya lives a fairly normal life. She works at the coffee shop she owns with her dad, has a nice supportive family… except she’s a werewolf. She’s done a good job hiding it for 20 years, but bodies starting to turn up and some weird guy came sniffing at her… turns out, there’s a lot more people like her that she could have imagined…

I was drawn to the style of this comic right away. It’s clean and simply just really nice to look at, with a good sense of anatomy, facial expressions and might I say, glorious flowy hair. The character designs are simple but easily recognizable, and I like that you can really see the resemblance between Malaya and her parents and brother. The cast is fairly diverse, which is always a good point. It’s mostly in black and white, apart for the occasional colored page, (in later chapters and pages, most of the comic is colored) and I was really impressed at the quality of the rendering of lighting and mood through just greyscale (I particularly like that bit with Elias outside and Mal behind the door, that just struck a chord in me). The backgrounds are well thought out, appearing and fading out when needed, with a good sense of perspective. There’s a few action bits that I found really good, they’re dynamic and the use of action lines is well crafted. The art style overall has a great quality to it, and its a joy to look at. 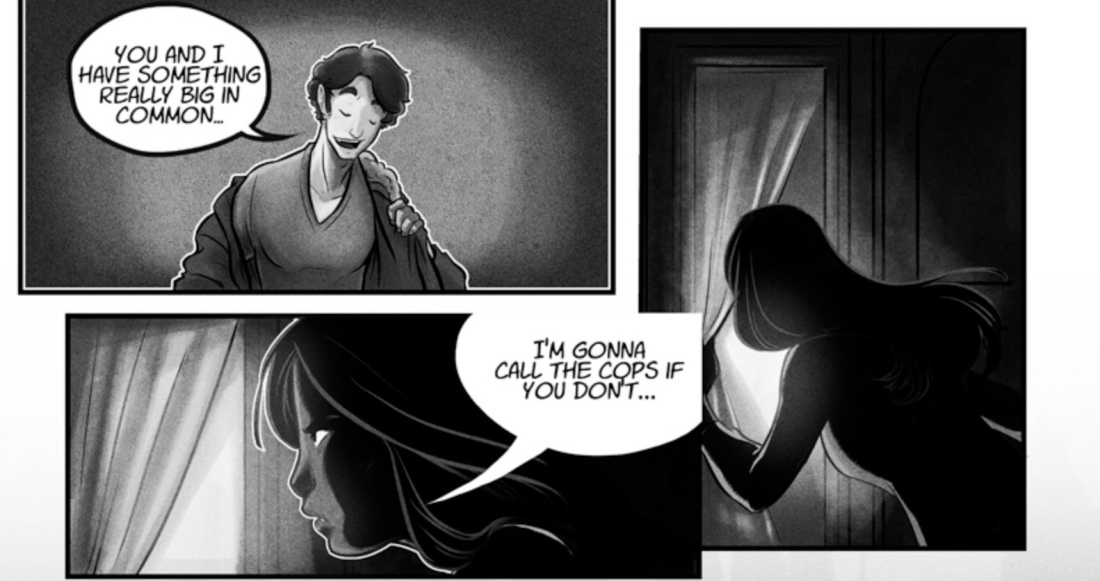 In HTBAW, we follow Malaya, a werewolf who’s used to hiding her true nature, who’s never met another one of her kind in her life. Until she meets Elias, a young man born this way with a good family pack, who realizes she might be in danger if she doesn’t learn about herself more. He warns her that there might be other werewolves around, as body have started to turn up, and decides to help her figure this all out. Reading this comic, you just know the story is rich and well thought off. There’s a lot of details, a lot of things to learn and its all so interesting. The interactions between characters are this comic’s strength, and you just want to keep reading to learn more about all that’s unraveling very quickly. And that’s the only bit that bothered me slightly: it all happens so quickly. Sometimes the chain of events feel a bit easy, maybe Mal trusts Elias just a bit too quick, for example. But, that means it makes for good page turners, as there’s isn’t any page where you don’t learn something. The pacing gets better as I kept reading, so I’m sure this is something the author figured out as they kept working, which is just great to see.

With 10 chapters and hundreds of information filled pages, HTBAW is not a quick read, but it’s one very worthwhile. From the art that just draws you in to the well crafted story, it secures its place as a great comic to read and enjoy. If you love werewolves, intricate stories and slow burn romance, this is just the comic for you!

Would I recommend: Highly! For the lovers of lore and creature based stories.

Will I keep reading: Heck yes!

Where to find the author:

What is Webcomic Review?

Webcomic Review is a small independent blog run by comic artist and illustrator Potassium. The aim is to provide clear, wholesome and constructive reviews of your favorite and potential new favorite webcomics.